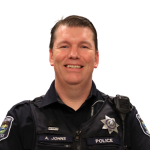 Officer Aaron Johns grew up in a small town in Oregon. After high school, he attended two years of college then enlisted in the US Army. After serving his country from 1994-1998, he returned home and was immediately hired as a Eugene Police Officer. In 1999, he married his wife, Kimber, and they had four beautiful children.

Officer Johns started his career as a Patrol Officer and worked in this capacity for 13 years. As a Eugene Police Officer, he mentored other officers as a Field Training Officer. He also worked as a member of the Crowd Control Team and the EPD Bicycle Team. Although Officer Johns enjoyed these specialized assignments, he always had a passion for kids and when the School Resource Officer position became available, he knew this was the right fit for his personality. Officer Johns has worked in this position for the last eight years. He is also a firearms instructor and an active member of the Eugene Police Department’s SWAT Team.

Officer Johns understands the importance of mentoring and protecting youth. He plans on finishing out his fulfilling career as a School Resource Officer.