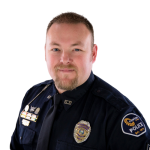 Jon Adkins of Newton, Kansas, has served as a member of the Newton Police Department for 12 years, the last 6 as a school resource officer.
His six years as a SRO have been served at the elementary and middle school level, with his focus currently at 5 elementary schools and Cooper Early Education Center, a preschool operated by Newton USD 373.
Adkins served six years in the Army National Guard, with one deployment. He earned an Army Achievement Medal for his service.
As a National Association of School Resource Officers Practitioner, Adkins was awarded the Kansas Juvenile Officers Association Presidential SRO of the Year Award in 2017. He currently serves as vice president of the Kansas Juvenile Officers Association.

How to build meaningful and purposeful relationships, for safer schools