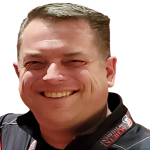 Viewer Discretion Advised: A discussion of two fatal wrecks, one involving a school bus driver and one with another driver fatally injured. Tweet this

This presentation will help prepare for responding to the unthinkable: a fatal wreck that involves a school bus or other district vehicles. Two fatal wrecks will be discussed, one involving a school bus driver and the other involving another driver who was fatally injured. We will discuss preparation, action, response, and decompression techniques as well as key findings to how these occurred.