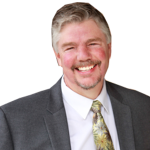 Dan is superintendent of schools in Eureka County, Nevada. Eureka has the highest 10-year graduation rate in the nation, the highest test scores in Nevada, the highest aggregate school climate scores in the state, and the highest college/military placement in the Nevada. Dan also serves on the Nevada Emergency Management Team, the Governor’s Educator Ethics Commission and the State Grants Commission.

He served as an assistant principal and athletic director for six years, a principal for five, a district director for two, and is in his third year as superintendent of schools.

How to Provide Positive Leadership During Challenging Times