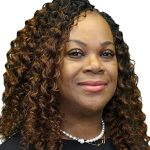 All students deserve to have a male role model to support them. Tweet this

Kim Hinckson Pendleton, Ph.D. is a native of Guyana, South America. Dr. Pendleton immigrated to the United States at the age of 13 to live the dream of earning an education by her late grandmother, Dorothy Harte. Dr. Pendleton received a Bachelor of Arts in Biological Sciences from Fisk University in 1988, a master’s in educational leadership from Northwestern State University in 2008, and a Doctor of Philosophy in Educational Leadership from Keiser University in 2014. She is the oldest of eight children and the mother of three adult children, Justin, Erika, and Gabrielle. A member of professional and social organizations, including Alpha Kappa Alpha Sorority, Inc., Dr. Pendleton is community service minded.

After 10 years of service as an instructionally focused assistant principal, Dr. Kim Pendleton is the principal of Southwood High School in Shreveport, Louisiana since January 2020. Dr. Pendleton brings a wealth of knowledge from her tenure at Northwood High School where she worked intensively to increase career and technical opportunities for students while also partnering with teachers to increase training aligned to changes in state standards, dual enrollment, and Advance Placement.
Her resume includes noteworthy accolades including reducing academic failures at campuses she has served by up to 69 percent and increasing graduation rates by up to 10 percent in a single year. Dr. Pendleton began her career in Caddo Parish Public Schools as a science teacher after a career in child protective services for the City of New York and serving as a coordinator for treatment alternatives to incarceration in the state university system of New York, El Paso, Texas and Shreveport, Louisiana. After 13 years of classroom experience, she began her first administrative role in 2009 at Huntington High School and moved to Northwood High School in 2012.
In addition to her work in Caddo, Dr. Pendleton is respected across the region for her role with various groups including serving as the lead school team evaluator as part of the AdvancED accreditation team, the leading accreditation agency for K-12 and university schools and systems.

Dr. Pendleton service as principal addresses the whole child by involving all community stakeholders. Among her top goals for Southwood, she desires to continue to build the school’s biotech magnet program, intertwine career and technical industry-based certifications with courses offered at the campus, and improve brand awareness and recognition of the school.

A high school is Southeastern United States had a series of gang/group related fights over a three-day period. A group of parents met with the principal and created a group called "Dads on Duty", a group of men serving as role models to help support the student population despite their race, culture, or ethnicity. In one month, gang/group fights declined 100%.