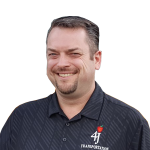 Viewer Discretion Advised: A discussion of two fatal wrecks, one involving a school bus driver and one with another driver fatally injured. Tweet this

Chris entered the pupil transportation industry in 1996 as a special needs school bus driver for Eugene School District 4J in Eugene, Oregon. Chris spent 4 years driving both special education and regular education routes. In 2006, Chris was hired as the Director of Transportation for Greater Albany Public Schools in Albany, Oregon. In January of 2013, he returned to the Eugene School District as their Director of Transportation and Fleet Services.
Chris is currently in his second term as state president of the Oregon Pupil Transportation Association.
He has presented numerous driver and administrative trainings on the local, state and national levels.
Chris’s passion lies with helping others in the pupil transportation industry. From driver training to administrative mentoring, Chris loves to help others learn and grow while also continuing to broaden his knowledge base within pupil transportation.

This presentation will help prepare for responding to the unthinkable: a fatal wreck that involves a school bus or other district vehicles. Two fatal wrecks will be discussed, one involving a school bus driver and the other involving another driver who was fatally injured. We will discuss preparation, action, response, and decompression techniques as well as key findings to how these occurred.

Learning objectives include preparation, action, response and decompression techniques in response to a potentially horrific event.