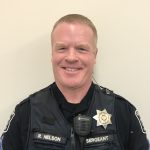 Sergeant Nelson grew up in a small town in Oregon, within 10 miles of Officer Johns. He graduated from the University of Oregon with a Business degree. While in college, he met his lovely wife, Cherie and married her in 1997. He has two amazing boys, one of which was born during the first week of his academy. Sergeant Nelson started with the Eugene Police Department in January 2002, and has been there ever since.
Sergeant Nelson started out as a patrol officer and was promoted to Sergeant in 2008. During his career as an officer he was an EVO instructor (Emergency Vehicle Operation Instructor) and FTO (Field Training Officer). As a Sergeant he was/is an FTO supervisor, crisis intervention supervisor, EVO supervisor, and an internal affairs investigator.
Sergeant Nelson completed his four years in internal affairs and came back to patrol as a team supervisor. All throughout his life he has had a passion to help and mentor youth, when the SRO supervisor position opened after his second year back on patrol he applied for the position and was selected.
Sergeant Nelson has been the SRO supervisor for the last two years and feels like it has been the most fulfilling job he has had in his entire career. He plans on ending his law enforcement career in this position with the hope he can impact youth in his community.