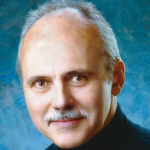 Dr. Steve believes that one person can make a difference with the power of many, and that is why he is a teacher. Tweet this

Steve grew up in poverty in a housing project in a single parent family. His third grade report card read, “Parent notified boy is retarded.” In the ninth grade, after being involved in a school fight, he had two hip operations and was told that he may never walk again. He was in a wheel chair for a year. The doctor told him he better start to listen to his teachers. And, as he tells students today, the more he listened, the smarter the teachers became.

His high school counselor told him that he didn’t have the “IQ” to go to college, but the counselor didn’t know that he had the “I WILL.”

Education was the only way out of the ghetto for Steve. When he graduated from high school, he worked full-time to get his family off welfare before entering college. He learned how to deal with the challenges of being ADHD and dyslexic. His childhood disabilities and experiences were “gifts” or “grit” that offered unique opportunities that helped him become a better person and educator.

He is an Adjunct Assistant Professor, School of Medicine, Case Western Reserve University, and President of his company, Health Education Consultants. He has worked in schools worldwide for over 30 years, He delivers cutting edge information and skills in an entertaining, motivating, and inspirational presentation that lets theory translate into practice.

He was invited to the President’s White House Conference on School Safety, and he keynoted the First International H1N1 Swine Flu Conference in Washington, DC, which was featured live on C-SPAN. He has been a guest on Oprah and featured in USA TODAY.

After he suffered a cardiac arrest, he realized that it takes more than one person to save a life. His message changed. Dr. Sroka’s spirited new programs bring to life the belief that you need The Power of One and The Power of Many to change schools, communities and lives.

Dr. Sroka received the Outstanding School Health Educator Award from the American School Health Association, was selected the Disney Outstanding Health Teacher of the Year, and was inducted into the National Teachers Hall of Fame. But his most meaningful “award” was his six-year-old daughter telling him he was smarter than the cartoon character, Inspector Gadget. Obviously, his wife does not agree.

His life has been gratifying. He went from living in the “projects” to living as a professor. From being labeled “retarded” to being labeled renowned. He went from the “hood” to the National Teachers Hall of Fame. He went from being in obscurity to being on Oprah. Where once school professionals helped him walk again, today Dr. Steve helps school professionals help students to get back on their feet. He believes that one person can make a difference with the power of many, and that is why he is a teacher.

The U.S. Department of Justice announced a $127.5 million settlement resolving 40 civil cases including 16 of the 17 families of shooting victims of the 2018 Parkland mass school shooting, where 17 people were killed and 17 were wounded.

Everytown for Gun Safety, a nonprofit that advocates for gun control, reports that the “first half of the 2021-2022 school year had the most school gun violence in recent history.”

Gun violence in schools has been a growing concern for years and has been exacerbated by the pandemic. As students return to in-person learning, violence is pouring into school buildings and nearby neighborhoods. With the increase in school violence, particularly gun-related violence, comes an increase in settlements.

After many of these incidents, five disturbing perspectives seem to repeat. With all due respect, consider the high-profile school shooting tragedies, and reflect on how these series of responses evolved.