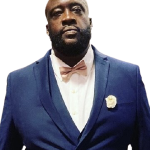 All students deserve to have a male role model to support them. Tweet this

Zachary Johnson is a native of Shreveport, Louisiana. He is the owner of Superman Private Security since 2019. He is married to Shemika Johnson and the father of six children. He was ranked number three in the nation leaving high school where he won two AAU National Championships. Mr. Johnson played basketball at Louisiana Tech University from 1999-2003. After college, Mr. Johnson played semi-professional basketball overseas for six years. He is the chairman for Dads On Duty and is a protector by nature. He aspires to provide students with the care received from his hardworking, church going grandfather and what he yearned from his father.

A high school is Southeastern United States had a series of gang/group related fights over a three-day period. A group of parents met with the principal and created a group called "Dads on Duty", a group of men serving as role models to help support the student population despite their race, culture, or ethnicity. In one month, gang/group fights declined 100%.