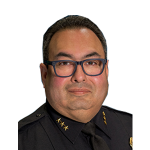 Cordova received his associate degree of applied science from Lone Star College and his bachelor’s and master’s in criminal justice from Sam Houston State University. He is certified as a Master Peace Officer, Master Jailer, Crime Prevention Specialist, and as a Police Instructor.

Cordova and his wife Marie have two daughters, Monica Cordova Aces and Victoria, both of whom graduated from Nimitz High School. Monica was the salutatorian of her senior class.