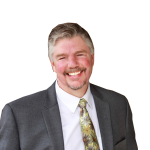 We spend so much time, money and energy on feel-good programs that are ineffective, when we have simple, proven steps that work Tweet this

Dan is superintendent of schools in Eureka County, Nevada. Eureka has the highest 10-year graduation rate in the nation, the highest test scores in Nevada, the highest aggregate school climate scores in the state, and the highest college/military placement in the Nevada. Dan also serves on the Nevada Emergency Management Team, the Governor’s Educator Ethics Commission and the State Grants Commission. He has spoken in several states and at national conferences on how School Climate impacts Student Safety.
In 2008 Dan was named Nevada’s Most Visionary Educator, in 2016 he was named Nevada’s FFA Star Administrator for his involvement in and support of student activities, and in 2019 he is receiving the national Gatekeeper Award for his advancement of student and staff safety.
Dan grew up near a small town on a Reservation in Washington State, where his parents and grandparents had orchards and vineyards. He got his first college degree in engineering, and then in teaching Art and PE. Dan attended college on a track scholarship, and made the basketball team as a walk-on.
“Coach Wold” taught art and PE, and coached basketball and track, for 24 years before moving into administration. He served as an assistant principal and athletic director for six years, a principal for five, a district director for two, and is in his third year as superintendent of schools.
Dan does artwork on commission, and enjoys hiking and fishing. He also plays in a band that has been voted “Tahoe’s Favorite” for the last three years.

Research has established that there are direct links between school climate, student and staff safety and student achievement. We will explore those links, and simple action steps we can all take that improve all three. Through this process, we will also look at why many traditional programs fail. Lastly, we will look at what student behaviors can signal alarm.

Participants will explore the links between school climate and student and staff safety, and simple action steps we can all take in that regard.