One Pass Gives You Access To All Four Co-Located Conferences!
Register for any conference and enjoy all-access to every keynote, session, networking event, and exhibitions for all four co-located conferences. 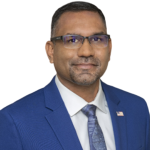 Arvinder “Vinny” Ginda has been in law enforcement for over 25 years. He was a Police Officer with Marysville PD and then Sutter County Sheriff’s Department. When he left Sutter County in August of 2004, he was assigned as a Detective/Deputy Coroner. His primary experience has been in International and Domestic Terrorism programs working with federal law enforcement agencies.  Vinny has also been a Hostage Negotiator for approximately 17 years. Throughout his career, he has had numerous deployments overseas to include two tours in Iraq. Outside of his career in law enforcement, he has researched emotional intelligence with an emphasis on the impact of technology on the developing adolescent brain.  He has also conducted research and written papers on how first responders cope with short-term and long-term stress. These research opportunities have allowed a greater understanding of how individuals make decisions during critical situations.  His research, training, and experience have allowed him to create various training and workshops that instruct first responders how to effectively have increased situational awareness. These training and workshops also focus on balancing emotionality versus rationality during critical incidents.

Arvinder “Vinny” Ginda will provide key techniques that will be valuable considering the challenging times we seem to be facing on a daily basis. During this session he will provide an overview on how we perceive, interpret and internalize various levels of stress. He will also introduce information about how long term stress can impact daily life and how prolonged stress can lead to Post Traumatic Stress Disorder (PTSD). Additionally, He has outlined five methods to consider when developing an individualized emotional balance plan to assist with reintegration back to “normal” or daily work/family environment.